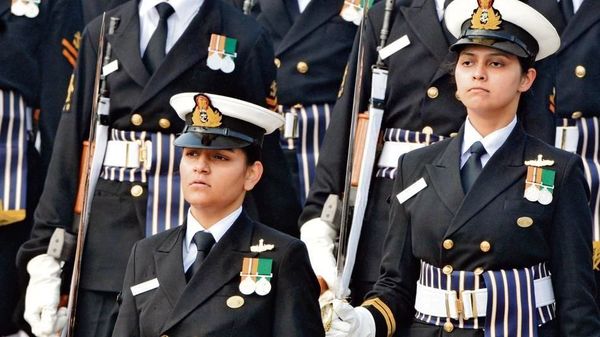 The Supreme Court (SC) on Tuesday ruled in favour of permanent commission to female officers in the Indian Navy and asked the government to treat men and women equally in the armed forces.

The apex court bench headed by Justice D.Y. Chandrachud scrapped the statutory bar on giving permanent commission to women and said that the government cannot discriminate against women. “They (women) can sail with same efficiency as male officers," said the bench also comprising Justice Ajay Rastogi. The division bench also rejected the Centre’s stand that sea sailing duties cannot be granted to Short Service Commission (SSC) women officers in the Navy because its Russian vessels do not have washrooms for them.

“A hundred and one excuses are no answer to the constitutional entitlement to dignity, which attaches to every individual irrespective of gender, to fair and equal conditions of work and to a level-playing field. A level-playing field ensures that women have the opportunity to overcome th…
Post a Comment
Read more 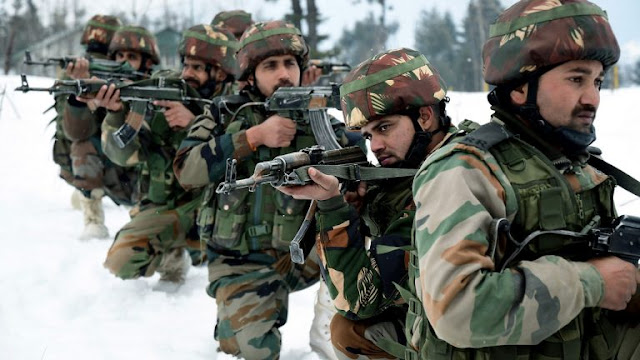 While the Indian Army is bearing the burden of a large personnel driven force, the Chinese are in the midst of a massive modernisation.
With approximately 1.4 million personnel, the Indian Army has become the world’s largest ground force, pulling ahead of China, which cut down its strength by half and is instead focusing on its navy, air force and technology.
According to the Defence of Japan 2019 report, released late last year, China has the third largest ground force in the world following India and North Korea, with approximately 9,80,000 personnel.
The Peoples’ Liberation Army (PLA) was always regarded as the largest army in the world with an approximate strength of two million soldiers.
India, which has been keenly watching the PLA’s modernisation, is just in the initial stages of building a leaner and modern technology-enabled force as envisioned by Prime Minister Narendra Modi in 2015.
However, while China has been working on a massive modernisation of its force, India’s modernisat…
Post a Comment
Read more 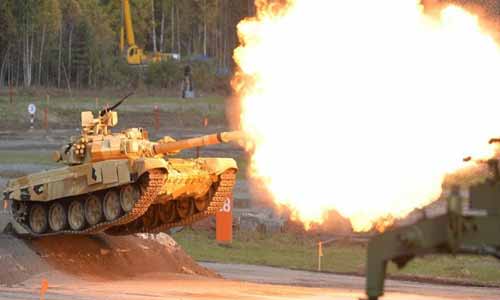 India has commenced manufacturing 400 T-90S battle tanks for its army after it signed a contract with Russia to extend the build license until 2028, last year.“India made a decision to purchase T-90S tanks, which they are already producing under a license agreement. We extended the previous license deal until 2028 last year, so India could build 400 more tanks,” Head of Russia’s Federal Service for Military and Technical Cooperation Dmitry Shugayev said during an interview with Rossiya-24 TV on Monday.The Indian defense ministry’s acquisition body approved the purchase in November 2016.
Last April, India’s plan to procure a fresh batch of 464 T-90 tanks for $1.93 billion (INR 13,800 crore) was doing rounds in the media. "Russia will prolong the license for production of T-90 tanks in India. This is in connection with the Indian government’s decision to purchase more tanks for its armed forces," TASS reported, quoted the federal service as saying.Following this, a Jane’s repor…
Post a Comment
Read more 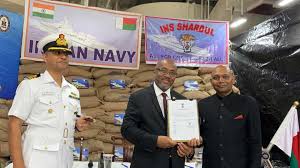 India on March 12, 2020, Thursday, handed over 600 tonnes of rice and relief material to flood-hit Madagascar, the Navy said.

An official ceremony for handing over the rice from Government of India to Government of Madagascar was held onboard INS Shardul on Thursday.The ceremony was attended by the Madagascar Foreign Minister Tehindrazanarivelo Djacoba and various high ranking officials from the Madagascar defence forces and civilian organisations.

The Indian side was represented by Ambassador of India to Madagascar Abhay Kumar and the ship's Commanding Officer, Cdr Abhishek Pathak. "The foreign minister of Madagascar appreciated the assistance provided by India and the Indian Navy. He described India as a true friend who is always there during the time of need,&quo…
Post a Comment
Read more 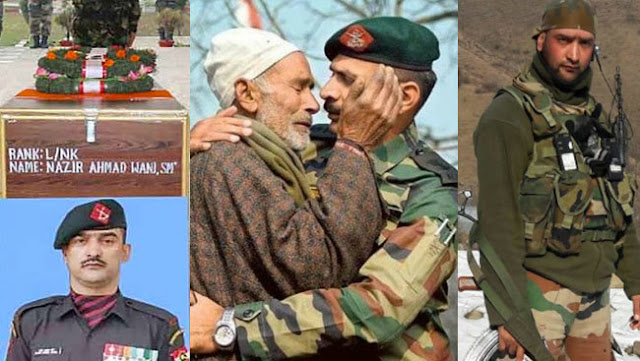 (The following has been excerpted with permission from ‘The Real Wani — Kashmir’s True Hero’ by Sonal Chaturvedi, and published by Bloomsbury. The subheadings are not part of the book, and have been added by Cavalier India. The views expressed are the author’s own. Cavalier India neither endorses nor is responsible for them.)


Mid-November in 2018 marked the beginning of chilly Kashmir winters. The weather was seemingly calm, but clouds were looming in the sky. Similar was Nazir’s state of mind as he walked through the lane to reach the office of his junior commissioned officer (JCO), Subedar Major Dilip Singh. Nazir wanted to discuss the seniors’ dissatisfaction with the work of the soldiers. He vented his heart out to Singh who had known Nazir since his recruitment days.
He was well aware that Nazir had and would go to any lengths to protect the country. He tried to calm his colleague down: “Don’t worry,” he said, “there are highs and lows in every sphere, be it work or personal life. …
Post a Comment
Read more 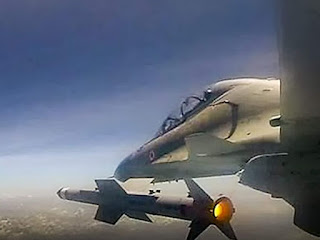 HIGHLIGHTSAlong with the Meteor missile, India's indigenously made Astra missile, will allow the IAF to regain the air strike superiority it surrendered to Pakistan post the Kargil War.
Pakistan's AIM-120 C-5 AMRAAM missile, reportedly, has a maximum range of approximately 105 km.
The MICA has a maximum range of just 50km, and the R-77, supposedly Russia's answer to the American missile, has a range of  80km.
The Astra, with a reported range of 100km, will prove to be a fine addition to the spine of the IAF's fleet. The Indian Air Force (IAF) has begun the process to procure and induct the indigenously developed Beyond Visual Range (BVR) Astra missile into its fleet. Along with induction of the Astra, it is also currently integrating the Israeli I-Derby Extended Range missile on its Su 30 MKI. Speaking to the media, IAF representatives explained that, along with the medium-range BVR MICA, and the long-range Meteor missile, India's air strike capabilities would be sign…
Post a Comment
Read more 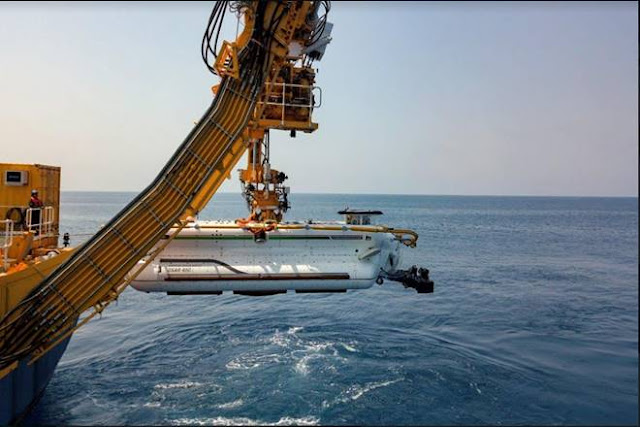 Denial of access to unauthorised vessels inside India’s Offshore Development Area is a major challenge, with warships and submarine involved in the robust surveillance arrangement.

The submarines deployed in forward areas to showcase India’s interest in the Indian Ocean Region (IOR) is critical but the underwater operations carry many risks. However, seawater profile for detection of underwater routes by the submarine’s navigational sonars etc., are a matter of concern. Denial of access to unauthorised vessels inside India’s Offshore Development Area is a major challenge, with warships and submarine involved in the robust surveillance arrangement.

These submarine operations can provide high-quality ISR (Intelligence, Surveillance and Reconnaissance) information during peace times and this capability comes from the submarine’s ability to enter an area to watch, listen and to collect the information because it can operate stealthily close to the action they can capture many elusive signal…
Post a Comment
Read more 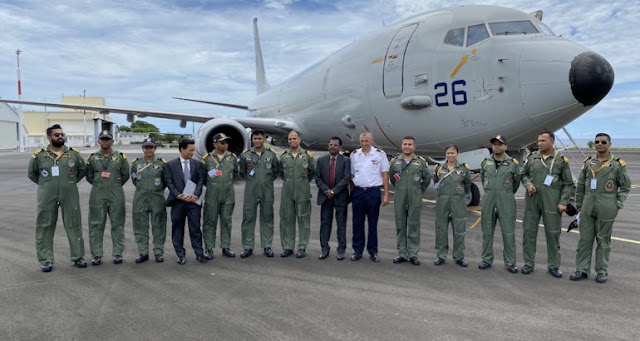 An Indian Navy P-8I Neptune Maritime Patrol Aircraft (MPA) visited Reunion Island to train with the French Air Force and Navy based on the island, known as "FAZSOI".
FAZSOI stands for armed forces of the southern Indian Ocean area (forces armées de la zone sud de l’océan Indien in French). According to local media Zinfos974, the P-8I and its crew stay for 5 days on the French island located in the southern Indian Ocean, and flew back to India on March 3. #IndiaNavy#Boeing P-8I Maritime Patrol/ASW spotted landing in #Reunion, possibly part of #India-#France joint naval patrolling in the #IndianOceanRegion in a rare french non-nato military link

📌More by @manupubby on the development in 2019 https://t.co/bxOzmq2MAdpic.twitter.com/3JL7fNjc1a — d-atis☠️ (@detresfa_) March 2, 2020The visit of the Indian MPA is in line with the framework of the Indo-Pacific relations and France-India cooperation desired by French President Emmanuel Macron.
The commanding officer of “Détachement Air…
Post a Comment
Read more 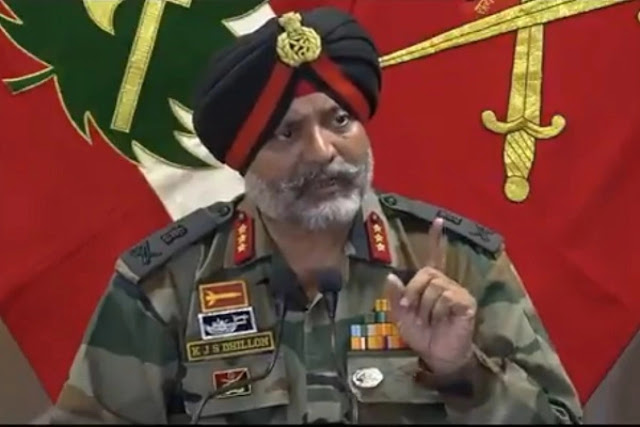 Lieutenant General KJS Dhillon, who was the commander of the Srinagar-based 15 Corps till recently, has been appointed as the director general of the Defence Intelligence Agency (DIA), and Deputy Chief of Integrated Staff (Intelligence) under the Chief of Defence Staff (CDS) General Bipin Rawat in the Ministry of Defence’s Department of Military Affairs.

The DIA, which was created in 2002, is responsible for providing and coordinating military intelligence for the Indian Armed forces. The agency was created after the recommendation from a Group of Ministers which looked into lapses leading to the Kargil intrusion in 1999.
The DIA also forms part of the Multi Agency Centre, an umbrella of organisations which looks into infiltration of terrorists from Pakistan and Pakistan-occupied Kashmir.
After serving at strategic XV Corps of Army last year, Lt Gen KJS Dhillon will take over the post of Director General Defence Intelligence Agency and Deputy Chief of Integrated Defence Staff (Intellige…
Post a Comment
Read more 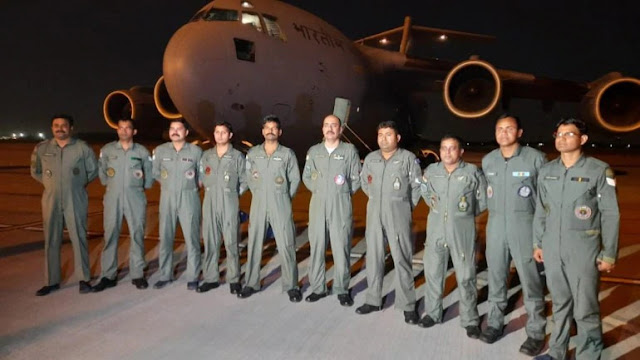 The aircraft, a C-17 Globemaster, was sent to Tehran on Monday evening. About 2,000 Indians are living in Iran, a country that has witnessed increasing numbers of coronavirus cases in the last few days. "The IAF aircraft has landed. Mission completed. On to the next," External Affairs Minister S Jaishankar tweeted.

In an earlier tweet, he said, "First batch of 58 Indian pilgrims being brought back from Iran. IAF C-17 taken off from Tehran and expected to land soon in Hindon."

"Thanks to the efforts of our Embassy @India_in_Iran and Indian medical team there, operating under challenging conditions. Thank you @IAF_MCC. Appreciate cooperation of Iranian authorities. We a…
Post a Comment
Read more 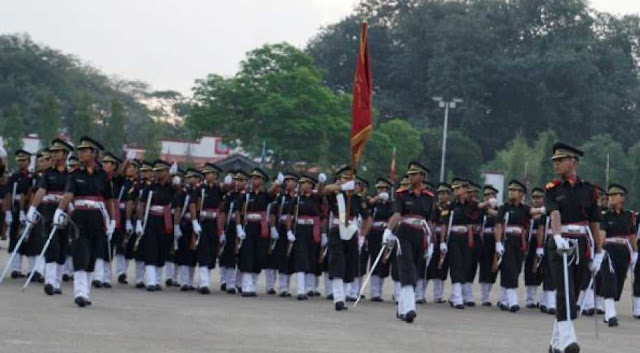 A girl from Andipatti who fought to avoid an early marriage, an engineer who left his high-paying job at Mercedes-Benz, a farmer’s son who is a first-generation graduate and a cadet who will be the second woman Army officer from Arunachal Pradesh were among the 178 cadets who braved the odds and passed out of Officers Training Academy (OTA) after completing a six-month gruelling training on Saturday.
As the world celebrated Women’s day this weekend, a group of men and women at the Army Officers Training Academy, Chennai were cherishing the completion of their 11-month rigorous training. At the spectacular Passing out Parade, 167 Indian and 11 foreign cadets were commissioned as officers into the Indian and their respective foreign Armies.

There were 136 Gentlemen cadets and 31 Lady cadets who passed out of the Academy, in addition to 11 cadets from friendly foreign countries such as Bhutan, Fiji and Papua New Guinea.

The parade was reviewed by Admiral Karambir Singh, Chief of the Naval …
Post a Comment
Read more 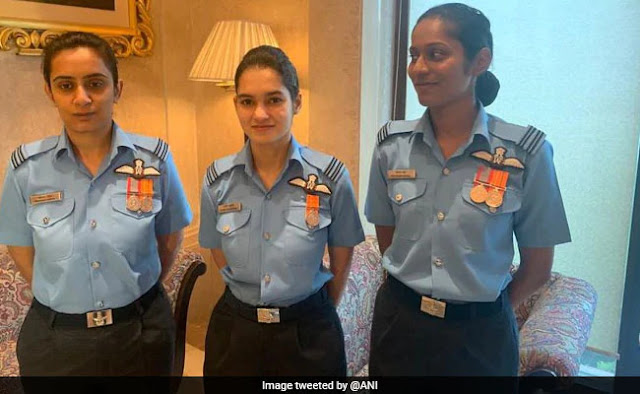 The three female pilots was inducted into the IAF's fighter squadron after the Government of India decided to open fighter stream in the force for women on an experimental basis.

The three were first to be inducted into the squadron and conduct a solo flight in MIG-21 in 2018. They expressed their desire to serve the nation and hoped to achieve more laurels in the forthcoming years. PM @narendramodi with #NariShakti Awardees at #NewDelhi. pic.twitter.com/tJtHvJUVbk — newsblunt (@newsbluntmedia) March 8, 2020Avani Chaturvedi completed her training in Hyderabad Air Force Academy. She has been …
Post a Comment
Read more

All armed forces’ branches to be open for women: Rajnath Singh 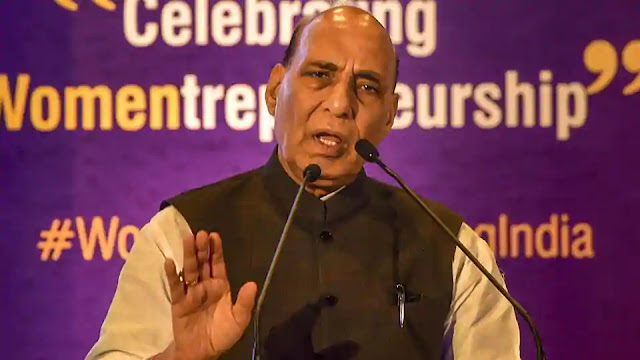 Defence minister Rajnath Singh on Sunday said that all branches of the armed forces would soon be opened for women officers as resistance to the idea was on the wane.

Defence minister Rajnath Singh on Sunday said that all branches of the armed forces would soon be opened for women officers as resistance to the idea was on the wane.